Hi there! My name's Lilura1 and welcome to my write-up on the best companions in Baldur's Gate and BG2.

• Bottom-tier: Any companion that isn't recruitable until reaching BG City. Namely:
• Alora
• Quayle
• Skie Silvershield
• Tiax
• Pairs. The vast majority of companions are recruited as individuals, but there are also four pairs...
◦ Jaheira & Khalid
◦ Dynaheir & Minsc
◦ Xzar & Montaron
◦ Eldoth & Skie
[browse alphabetically -- Good -- Neutral -- Evil]
Once recruited, these companions won't adventure without their other half unless that other half falls in combat or is intentionally killed off by the player and has their corpse kicked out of the party.
• Level Scaling. In BG1, un-recruited companions scale to party level in thresholds. For example, a first level party can recruit a first level Edwin with almost nothing to his name (some Exp, a few spells scribed to his spellbook); or a sixth level party can recruit a sixth level Edwin who has already earned over 40,000 Exp and scribed eight scrolls to his spellbook, including Haste (in Dynaheir's case, Fireball).
The intent of companion scaling is to ensure that companions remain somewhat useful in the advent their services are required later in the campaign, but meta-gamers may choose to remain solo or only adventure with Imoen until the sixth level is reached, and only then recruit a party, thereby dodging the experience point leach of having five other companions around for those first six levels (both quest & kill Exp is divided "evenly", more or less, amongst the party members).
Apart from needing foreknowledge in order to solo the first six levels [1], the downside is the inability to control companion proficiencies and HPs, though it's a small price to pay for such a huge advantage.

Note that it is best to recruit non-mages early (in order to control their proficiencies and HPs), and mages at sixth level (for spells such as Fireball and Haste).
[1] Not a problem for meta-gamers, and for Bards and Thieves that's only 20,000 Exp.
cf. Siege of Dragonspear Companions.
Baldur's Gate 2 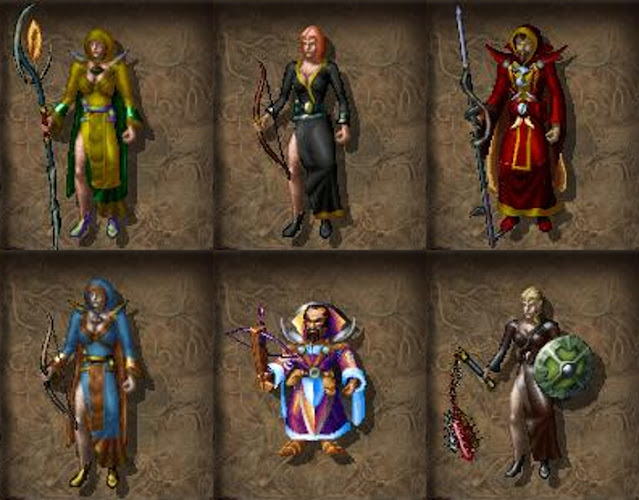 There are 17 companions in Baldur's Gate 2. Companions range in level from 7-17, but most are going to be around 12th level at the time of recruitment.
Multi-classes are King in the sequel, especially arcane MCs. Thus, the best companions are as follows:
• Top-tier:
◦ Aerie (multi-class)
◦ Jan (multi-class)
◦ Jaheira (multi-class)
◦ Edwin (+spellslots, but for good players they are superfluous)

[browse alphabetically -- Good -- Neutral -- Evil]
***
Criteria of Assessment:
We should ask ourselves the following when assessing a companion's worth:


• What class are they, what spells can they cast and what weapons can they wield?
• How combat encounter-impacting/dictating is the companion over the course of the campaign?
• How easy is it to recruit the companion, how early can they be recruited, and is their service to the party long-lasting?
• What are the companion's stats like?
• Can the companion be dual-classed?
• Are they arcane-capable?

• Are factional rivalry or personality clashes factors?
Such traits can be decisive factors in how a companion ranks.

Baldur's Gate 2: Canon Party: Imoen, Jaheira, Khalid (deceased), Dynaheir (deceased), Minsc.
In other words, these are the companions that are assumed to be in the player's party at the beginning of Baldur's Gate 2, even if they weren't.

In Diablo 2 , a build is a number of levels achieved in a class along with the stats and skills chosen, as well the items that are found, bo...

Get this Recent Comments Widget